I wake up around 5:30 a.m. on a Sunday morning, roused by a big group of people singing somewhere close by, almost chanting. It is still dark out, and I am in the neighbourhood of Glória in Rio de Janeiro. I learn through «worldtravelguide» that today we will celebrate Santo Antonio – with street markets, food and drinks. As well as couples jumping across bonfires and mock weddings. The same source reveals that this is the first of three saints to be celebrated in June and July – Festa Junina – and that the celebrations are connected to what we in the North know as Midsummer. But across the equator winter is coming.

Since I was here in November last year inflation has skyrocketed, electricity is something like 60% more expensive, there is a real possibility of catching dengue fever –  if not the full-fledged version, then certainly what is commonly referred to as ‘baby-dengeu’ which confusingly enough also starts with rashes on the chest and arms, intense pain behind the eyes that does not go away until four to seven days later, a dash of high fever and a lack of appetite. The corruption scandal in the semi-public oil company Petrobras doesn’t seem to end, the government has cut the budgets for health and education, and in Rio violence is on the rise. I have learned to distinguish fireworks from gunshots, and I am both happy and scared when passing the drug trafficking bar across the street. Happy because the bar owner and his crew seem to keep the peace in the street, scared because a slice of Brazilian everyday realism can be served up at any time. Museums must cut down their opening hours because they cannot afford the cost of air conditioning, and everyone I meet is complaining about a lack of discourse production in the art. A teacher in the public school system makes just under 2,000 Reais, equivalent to about €350. For parents with high-level education, but no money to put their children through private school, keeping their kids out of public school is a real option, resorting to home schooling and an environment of learning in a network of adults.

I spend every day with a group of 12 artists, curators, educators, writers and producers taking part in the yearlong programme at Capacete: A para-educational initiative with participants from many parts of the world, but also from Brazil. This creates a dynamic in the group where fact is mixed with curiosity. 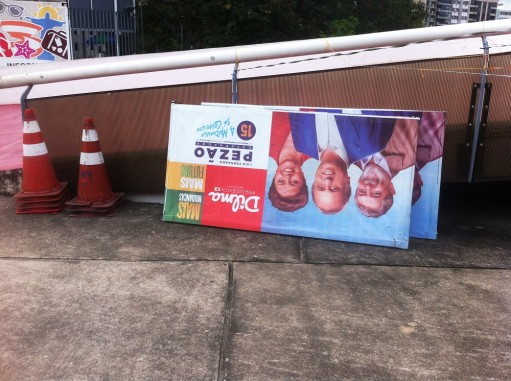 Election posters from October 2014, where Dilma Rouseff won after the second round. All photos: Anne Szefer Karlsen. 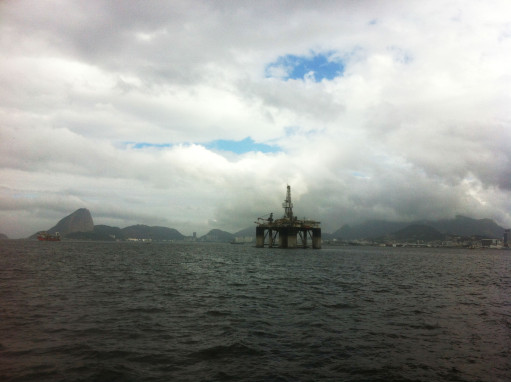 Drilling platform in Baía de Guanbara, the bay circled by Rio, with the famous mountain top Pão de Açúcar (‘The Sugarloaf’) in the background. 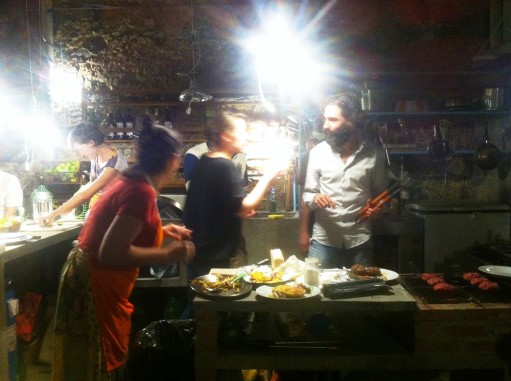 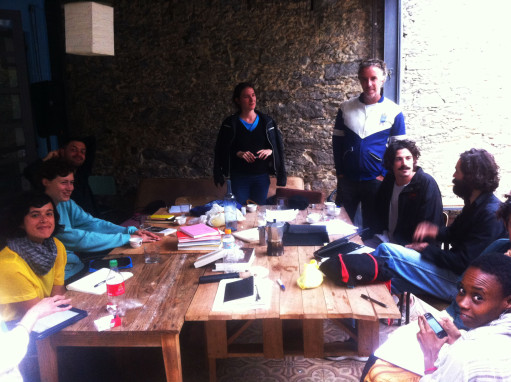 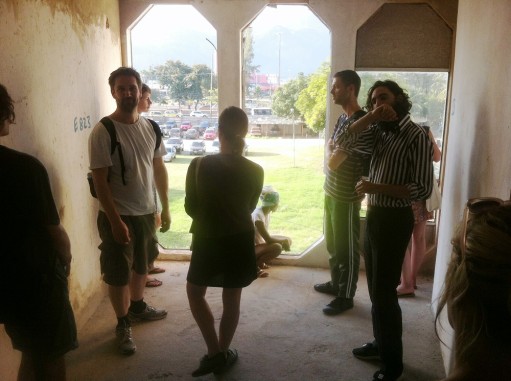 Wouter Osterholt (left) giving us a tour of the never completed tower. 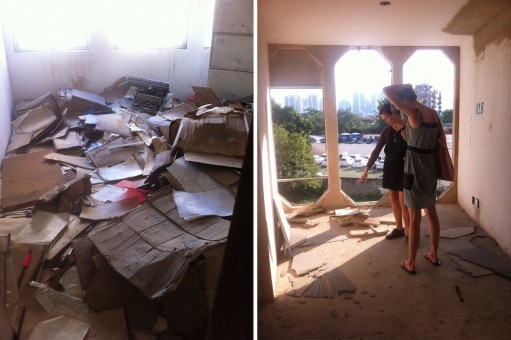 On the second floor of the never completed tower one of the units is filled by old document's blueprints – and an old typewriter (left). Asia Komarova and Tanja Baudoin (right).

Wednesdays are particularly busy. This is the day when the students (participants… residents… call them what you like, because no one has really taken the time to name the roles they are inhabiting this year) open the doors and invite the public for presentations, food and drinks. Three weeks ago I was sitting in the hot seat together with my colleague Daniela Castro presenting ’Self Organised, now available in Portuguese’. While we were talking about self-organisation, homemade burgers and the potent mix of lime, sugar and cachaça – distilled sugar cane – was served in the illegal bar. Next week the Wednesday night was a bit louder, resulting in the neighbour throwing eggs with surprising precision at the public and the police showing up. And unlike in Norway, the debate about police carrying firearms is long gone in Brazil: When they knock on the door they come carrying machine guns.

Thursday to Tuesday is typically filled with seminars presented by guests, or small excursions organised by the participants themselves. The week after our seminar we whizz through yet another tunnel, four mountains to the left from Ipanema on the map, and get off at the shopping centre AutoEstrada Lagoa-Barra. We cross the 14-lane motorway and meet the artist Wouter Osterholt, who will guide us around the tower where he and Elke Uitentuis filmed the video work Paraíso Ocupado.

Barra da Tijuca is a neighbourhood in the southwest area of the city. In the 1960s the city planner Lucío Costa drafted a modernist master plan for 76 towers, which were designed by Oscar Niemeyer. Only four towers were realised – one of which collapsed during construction, two are in use today and one is a modern ruin. It was never completed.

The characters in Paraíso Ocupado stage a script in English for a commercial film created to promote the area, geared towards foreign buyers. The artist found the script in the ghost tower, in an  ‘archive in chaos’ which still exists today on the second floor. We try not to show too much interest in the two rooms filled with archive folders, blueprints and an old typewriter when we move through the three lower floors, guided by the guard’s flashlight through the dark and spiralling staircases.

Finally, on my last day in Rio I have a chance to go to MAM – Museu de Arte Moderna do Rio de Janeiro. The museum has been between exhibitions the whole time I have been here, but Wednesday last week I went to see designer Manuel Raeder for a sneak preview of the exhibition Marginália 1 – Rogério Duarte. It is, as the title indicates, a survey exhibition of the practice of graphic designer, musician and poet Rogério Duarte. Duarte is the man behind the influential essay ‘Notes on Industrial Design’ (Notas Sobre o Desenho Industrial) from 1965. He also designed and edited several issues of the magazine Movimento 1, which started in 1962 and was seminal for a whole generation. Duarte was thus part of establishing the well-known Tropicália movement. Today he is a man in his late 70s, marked by a long and tumultuous life – largely thanks to the treatment he endured during the military dictatorship in Brazil from 1964 to 1985.

Many on the Norwegian art scene will recognise the name Capacete from a while back when the Office for Contemporary Art Norway offered residencies for artists and curators there. Manuel Raeder and Wouter Osterholt also have links to Capacete.  It was during a residency a few years ago that Osterholt came across the towers and his interest was sparked. And the exhibition at MAM has previously been on display in Euorpe, then partly produced by Capacete. And like so many guests before and after them, here they are again to continue their projects. There is something about this structure, whose name translates as ‘helmet’, which focuses your senses and directs your gaze. And for a brief moment I also have had the privilege of being part of this  – as a stowaway, witness or colleague, my role has been just as ambiguous as everyone else’s – yet it all seems logical.

Anne Szefer Karlsen is a curator and writer. She is series editor for the book series Dublett (Hordaland Art Centre 2013-2015), and curator for The Norwegian Sculpture Biennial 2015.

Is the scandal engulfing Documenta 15 a tragedy of the arts, criticism, or the German debate on anti-Semitism?

Centre Pompidou’s exhibition on the Weimar Republic reveals more than meets the eye.

The Berlin Biennale overlooks the fact that art doesn’t need to be didactic.